Expedition to the Ruins of Greyhawk takes place on the Material. Plane world of Oerth, specifically near the City of Greyhawk at the center of a continent called. Expedition to the Ruins of Greyhawk Excerpts. Shodei's Laboratory (1, k PDF/ZIP); Encounter Arrival at the Isle (k PDF/ZIP). This campaign adventure revisits the legendary ruins of Castle Greyhawk and its dungeons, incorporating many new twists and surprises. It is designed for.

There, two of Mordenkainen's allies, the warrior Lord Robilar , and Boccobite cleric Riggby , found the imprisoned Iuz and through Mordenkainen's manipulation, released the half-demon believing they could just kill him outright once and for all. Iuz, however, managed to escape the battle and fled back to his kingdom where he could recover his power and plot his revenge against his enemies.

Afterward, Robilar, along with the archmage Rary , betrayed Mordenkainen and the Circle of Eight a committee of wizards , by killing the great wizards Tenser and Otiluke , and leaving Bigby clinging to life. Mordenkainen had expected Rary to betray him sooner or later, but not Robilar, who was his trusted ally for decades.

Forty years later, in the Greyhawk realm's Common Year of , the player characters take on the role of adventurers who arrive at the Free City to explore the Ruins of Greyhawk looking for riches and glory. Under an oath with Zagig, Mordenkainen vowed never to enter the depths of Castle Greyhawk, but through researching Zagig's tomes, Mordenkainen only recently found a possible clue to Robliar's betrayal hidden deep inside the ruins.

Mordenkainen, barred by oath from entering the dungeons, recruits the band of adventurers to go into the chambers for him and find the secret behind Robilar's treachery.

Little do they realize they have stumbled upon an epic situation where failure could mean the destruction of the world. This late Greyhawk adventure was set late enough in the timeline to accommodate events from Living Greyhawk.

Unlike most published adventure modules, the Expedition to the Ruins of Greyhawk is technically an incomplete "open ended" adventure. Rather than detailing every single room of the dungeons below the ruins, only key areas that affect the main plot of the adventure are detailed.

In fact, entire dungeon levels are left unmapped and the DM is encouraged to improvise their own encounters to fill in areas not covered by the game with their own content. The game provides a list of random encounters for each dungeon level, generic dungeon maps left clear of content, and numerous side quests to help the DM along the way and keep the adventure flowing.

Shannon Appelcline notes that Greyhawk Ruins was remade into the 3E-compatible Expedition to the Ruins of Greyhawk , and while the book was published by Wizards, it was written by Paizo staffers such as Erik Mona and James Jacobs. Tim Janson of mania. Shannon Appelcline called this book "a long-awaited return to the most famous dungeon in roleplaying", noting that it was published as part of a series of nostalgic adventures which suggested that Wizards of the Coast 's original series of 3.

From Wikipedia, the free encyclopedia. This article needs additional citations for verification.

Other books: THE THREE FACES OF EVE EBOOK

Please help improve this article by adding citations to reliable sources. Unsourced material may be challenged and removed. What are you waiting for?

Twenty-seven years ago, a band of adventurers led by the great wizard Mordenkainen entered the dungeons below Castle Greyhawk and released the evil demigod Iuz, intending to slay him.

Betrayal led to failure, Iuz escaped, and many lives were lost.

Today, evil has returned to Castle Greyhawk, and Mordenkainen must place his trust in the hands of a new generation of heroes. Those who fail will be lost, and those who triumph will be legends. Castle Greyhawk has become a grand fixture of the Cairn Hills, tempting the likes of Mordenkainen, Bigby, and Tenser with its dark mysteries.

Today it lies in ruin, ravaged by years and countless assaults. The six adventurers were no match for the enraged Iuz, who escaped certain death in the clutches of Bigby's notorious crushing hand by plane shifting to the Abyss. That magical warp freed the additional gods and caved in many of Castle Greyhawk's deepest dungeon complexes.

After it was all over, safe on the skull-adorned battlements of his grisly palace, Iuz swore vengeance upon the adventurers who had attempted to kill him, dedicating a portion of his eternal rage to plotting their destruction. Twenty-seven years have passed.

To the west, in the not-so-distant city of Verbobonc, Riggby has escaped Iuz's vengeance by dying of natural causes in his twilight years. His body now travels by sacred procession along the Western Road toward Greyhawk, drawing the cleric's former companions from their sanctuaries and schemes to the city that once bound them together in long-dead friendships and alliances. Iuz's patience for the perfect moment to smite his enemies grows thin, and Riggby's funeral provides all the excuse he needs to initiate a scheme designed to bring Greyhawk to its knees and deliver his enemies into the hands of his torturers.

Already his soldiers have tunneled into the lowest levels of Castle Greyhawk from the Underdark, and although their ranks have not yet swelled enough to besiege the city, the time will shortly arrive.

Everything is in place for Iuz's final vengeance against the adventuring heroes of the last generation. But time does not stand still in Greyhawk, and the demon-god of the north has not accounted for the city's next generation of heroes.

In the process of their fantastic adventures they'll also explore the treacherous City of Greyhawk, where politics and thieves can do away with you just as easily as a falling stone block or guardian golem can.

Iuz's machinations against Mordenkainen and the City of Greyhawk are just part of the backdrop playing out behind your players' exploration of the castle. Plenty of reasons can tempt the players to keep delving into Zagig's dungeons, not the least of which is the promise of thrilling adventure and fascinating rewards.

Rumors dating back centuries suggest that the treasures waiting to be claimed below Castle Greyhawk will make the danger worth risking, the exploits of its heroes worth remembering forever. Expedition to the Ruins of Greyhawk provides the framework for a major campaign arc featuring several delves into the castle itself and numerous side quests situated in the Free City.

The adventure is intended for 8th-level characters, who should advance to about 13th level by the time they "complete" it. Finishing the events outlined in this volume does not mean that the PCs have finished exploring Castle Greyhawk, however, because the dozens of dungeon levels and associated demiplanes of Zagig's castle provide a limitless source of adventure well beyond the scope of a single book.

A general overview of the known castle levels and certainly several more remain to be discovered appears later in this book, but only those locations pertinent to the present campaign have been elaborated upon in detail. A series of random encounters allows you to treat the journey from the castle's front door to more important locations as wilderness travel, and these encounters can be used freely when the PCs decide to venture "off map" and away from the outlined adventure.

A general summary of Expedition to the Ruins of Greyhawk follows. 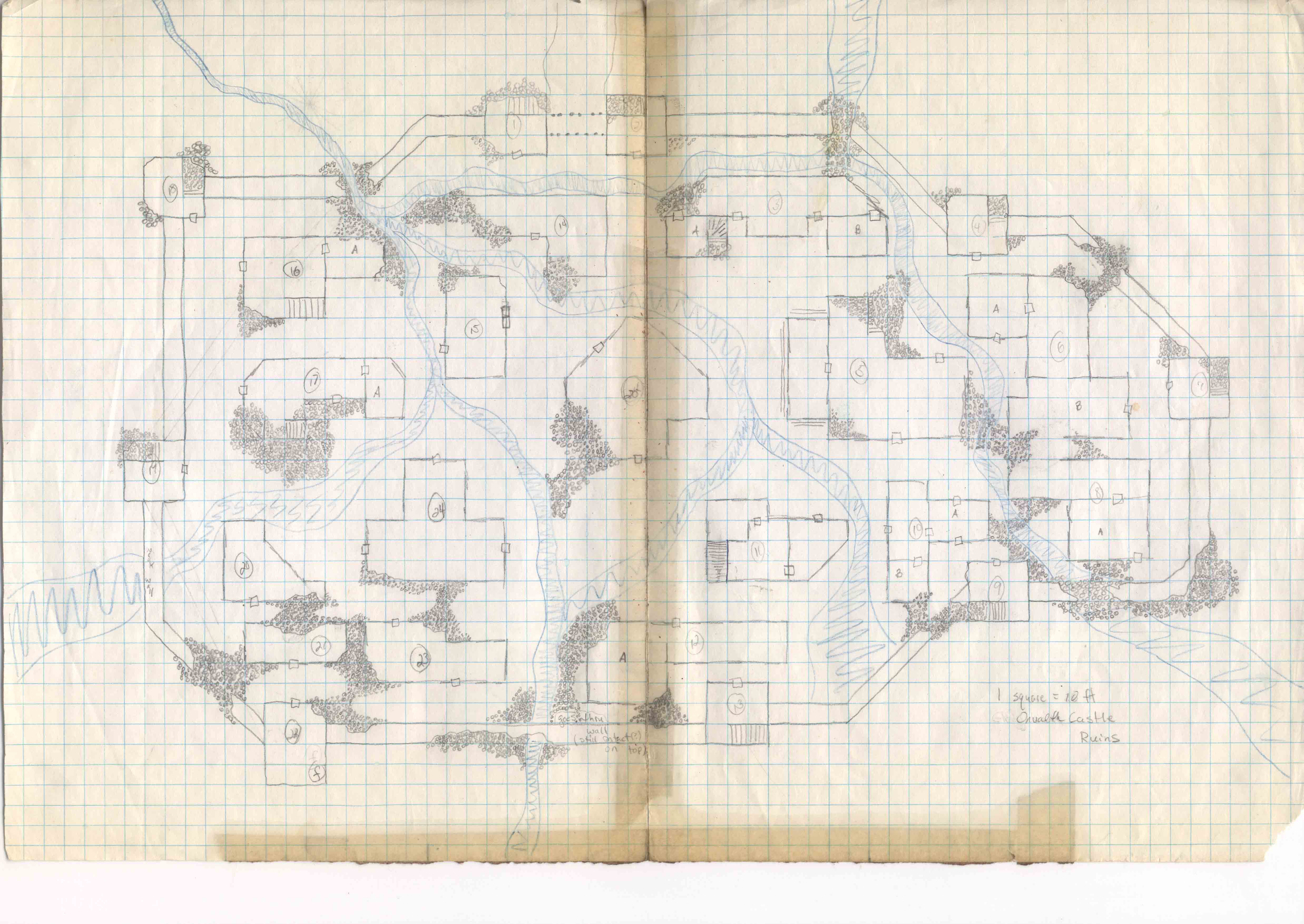 Chapter 1 The Free City of Greyhawk: Castle Greyhawk owes much of its renown to the eccentricities of the Mad Archmage Zagig Yragerne, and Zagig owes much of his fame to the city he once led, a sordid metropolis of opportunistic adventurers, crooked merchants, and fools delving in magical secrets best left undisturbed.

An overview of the city's districts provides the background you'll need to make this exciting locale come alive for your players. Several adventure hooks in each city quarter aim to get the PCs into Castle Greyhawk or provide them with fun city-based encounters to fill in the gaps between dungeon delves. An overview of the Green Dragon Inn ensures that the PCs have a fully fleshed-out base of operations in the city and sets the scene for several key meetings.You always get searched when entering the City.

Trap Engineer. Livery of the Guild: One-click unsubscribe later if you don't enjoy the newsletter. It's worth noting that this adventure uses the encounter format for encounters.